This month’s Spotlight features Mike Smith from the Fredericton Area. Although Mike didn’t always live in the area as he was originally born in Goose bay, Labrador in 1963. At the age of three though he packed up (or his parents did) and the family moved back to Fredericton, their home city. 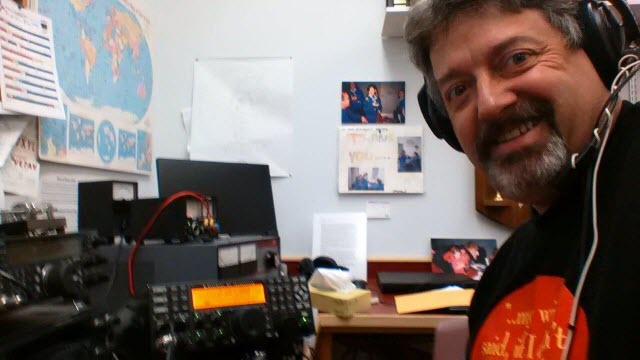 This is where he planted his roots for good and made Fredericton the city he would always call his home. Mike would graduate from the largest high school at the time in the Commonwealth, Fredericton High School, in ‘81 with a class size of well over 1500 and a ceremony that took three or more hours just to get through all the names. During high school he invested in the Electrical Program with a splash of the higher level academic courses as he planned to go into the Electrical or Electronics trade once finishing school.

Mike waited for a bit before continuing with the trade and it wasn’t until the late 80s that he attended and completed the Electrical course at NBCC Moncton. To be fully licensed as an Electrician doesn’t occur right away and takes a few years as an apprentice to obtain the designation. Mike worked in the field as an apprentice for a few years which would build a good base for his later education challenge as an Electronics Engineering Technologist.

This started in 1998 when Mike returned to NBCC Moncton and enrolled in the program. During the summer after his first year, Mike was lucky enough to gain employment as a student at the Dr Everett Chalmers Hospital’s Clinical Engineering Department where he gained some valuable work experience and guidance from the knowledgeable staff there. He found Healthcare interesting and challenging but also had no idea about the field as he took a step back when asked to work on a “blood cuff” and was a little tentative until he soon learned it was just a blood pressure cuff. A lot to learn, but September did come and Mike had to return back to Moncton to finish his education where he would graduate a year later.

Soon after graduating Mike was employed by Trinity Communications in Fredericton where he again expanded his knowledge in electronics and enhanced his troubleshooting skills. This was short lived as he eagerly jumped at an opportunity to join the staff back at the Chalmers hospital in March of 2000 as he loved the environment, the staff, and the challenges he had earlier experienced in the Healthcare field.

It has now been 16 years and Mike is less intimidated by the everyday work of Clinical Engineering as he is now the supervisor for the Fredericton Area CE department. Over the years he has specialized in the gen med side of Clinical Engineering and focused on critical care areas and enterprise software such as MUSE and MARS systems. Although it has been a little over a year as the department supervisor he feels lucky that he still gets to spend 35% of his time doing front line work and is still putting his skills to good use.

From the title of the Spotlight you may have guessed that something in this article has to do with Short Wave radio communications. This is one of Mike’s two hobbies and one that he has been interested in from a young age. Growing up, Mike was always interested in short wave radios as you could find him sitting beside his dad while they listened to communications from Radio Moscow and the BBC. Listening was great but Mike wanted to also correspond back to these countries, something he started at the age of 10 years old when he got his first CB radio. This is really where things kicked off and after studying Morse code, getting a handle on how to read some schematics, learn some radio theory, and memorize the regulations, Mike wrote and acquired his Radio License at the age of 14. If you think about it, back in the 70s Mike was actually doing the first “texting” to his friends across the world, but in Morse code. Over the years Mike has made it a goal to talk to almost every country that can be found, all except North Korea. To reach that goal Mike has even travelled to Sable Island and St Paul Island to help add countries to his list. Communicating from these spots makes it more appealing for other countries to reach out to you. Being able to get there wasn’t easy as special permission was required and a year’s worth of planning needed so that he could transmit from the islands.

A new challenge Mike is currently working on is to attend the World Radiosport Team Championsip (WRTC) that will be held in Germany in 2018. This is like the Olympics of Ham (Amateur) Radio. To attend this is just not a matter of entering, you need to log as many hours as you can over a set amount of time in RadioSport events called Contests. Mike sits in 5th spot in Canada. If he hits first or second he’ll have to brush up on his German for sure.

As mentioned earlier Mike has a second hobby or obsession, this one is for the love of the British Austin Mini car. The first Mini that Mike acquired was in 2003 which soon followed by a second in 2005. That little car enjoyed a trip across the Atlantic Ocean in a shipping container as it came directly from Wales and sported a right hand drive. The Minis didn’t stop there though as Mike now has a collection of three Minis, two of them being the modern day cars which sit alongside their foreign cousin in his driveway. At least one of these has travelled to NFLD while Mike attended the 2015 ACCES conference.

There is never a worry while Mike is traveling anywhere that he may not get cell signal, or dead battery in his phone as his backup is always the short wave radio installed in his cars. So if you ever meet a Mini on the road, with a strange license plate sporting his callsign, and a  7 foot antenna flapping in the wind, give a big wave as it sure to be him.

Over and out, Mike signing off. 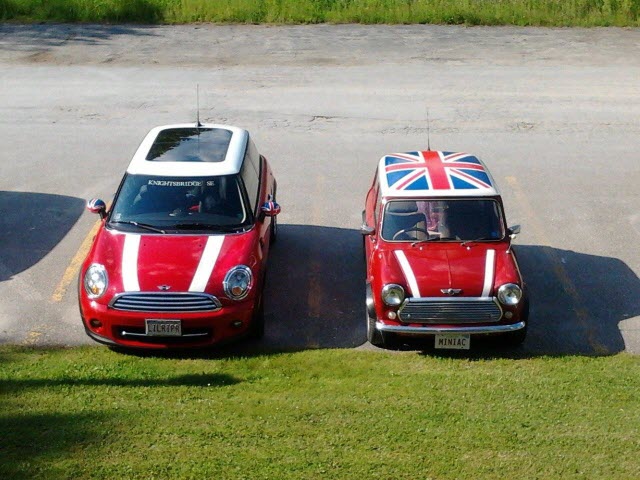